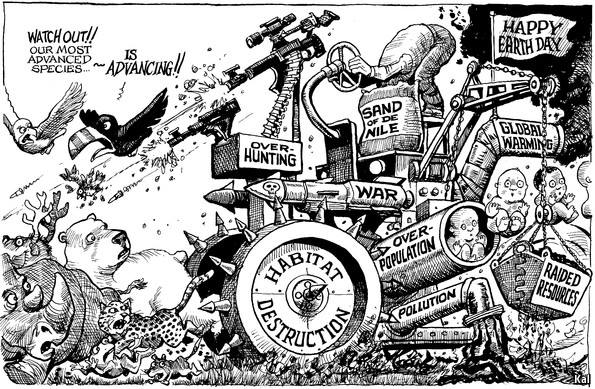 I was so shocked by the Indian Government’s and the Indian mainstream media’s interpretation of the reasons behind the recent floods in Chennai that I got confused whether to feel proud or horrified at the leaders of our country. Let me explain.

Western politicians who deny climate change fall prey to swift ridicule because of the easy availability of massive data proving the contrary. But how do you think the very “smart” politicians of India deny the existence of climate change? They use a simple two step method, firstly, they will acknowledge the existence of climate change and secondly, they will refuse to acknowledge the increasing number of devastating natural calamities as results of climate change. Take for example, the reaction to the Chennai floods from the Central Environment Minister who said- “What has happened in Chennai over last ten days is absolutely a very serious situation, this can’t be directly attributed to climate change; it is a natural calamity”. [ii]

The problem of climate change denial in India does not stop there, the climate change denying politicians are then assisted by the Indian media who lay the lion’s share of the blame of these “natural calamities” on secondary things like “urban planning” and “corruption” of city officials.[iii] But climate change is so indisputably the most important factor in the current flooding of Chennai that ignoring it will be like ignoring our basic knowledge of geography.

I have to admit that I do not have a huge interest in geography, so the “fool”mentioned in the title is me. But, changing the basic principle of geography will also mean challenging the basis of several historical events. So, in this article I have taken up the challenge of whether I can prove the Indian government’s above mentioned assertions on the reasons behind the floods of Chennai wrong by using the government’s own publications and resources.

Firstly, let us look at what the 9th standard NCERT (an organisation headed by the Union Human Resource Development Minister) textbook on Geography tells us about the issue under discussion. It basically says that the North Eastern trade winds which blows from over North Eastern Asia towards India in a South Western direction, first passes through North East India and Bangladesh. But in these two regions it does not assist in any precipitation because the trade winds so far has been travelling mostly over land masses and does not carry sufficient moisture. These North Eastern winds then travels over the Bay of Bengal and in the process pick up moisture from sea sufficient for “some amount of rainfall in Tamil Nadu”.[iv] I have put this information here as I have not come across any credible authority which says that this information in this text book is wrong.

Secondly, earlier this month the Director of Indian Meteorological Department announced that 2015 is almost certainly going to be the warmest year for India since 1901[v]. A similar conclusion is also arrived at by the World Meteorological Organisation (WMO) when it said that 2015 was likely to be warmest year on Record[vi]. If one reads carefully through the report of the WMO, it becomes abundantly clear that it reached the above conclusion after giving substantial importance to the Indian Ocean region in general and to the Indian subcontinent in particular.

Now, when we sum up the first and the second points mentioned above the reasons behind the devastating floods in Chennai becomes very clear, which are as follows:

The North Eastern trade winds devoid of much moisture traveling in a South Westerly direction reached Bay the Bengal. Since 2015 is probably the hottest year in record, the evaporation that took place over the Bay of Bengal was much more than previous years. This resulted in the trade winds acquiring much more moisture from over the Bay of Bengal than the previous years. More moisture means bigger and heavier clouds and heavier clouds mean slower clouds. So when these winds reached the land mass of Tamil Nadu, it resulted in heavier and longer rainfall. When such a common sense explanation for the Chennai floods exists how one can be receptive of the silly reasons being presented by the Government and the media is beyond me.

Now let us come to the assertions and aspersions casted by the Indian media that it is mostly the faulty urban planning and corruption of town officials that has led to the current flooding in Chennai. I think a comparison of Chennai with other cities which could be normally perceived as having better infrastructure and urban planning and development but which also faced heavy rainfall in the past 6 months would sufficiently answer this question for us.

According to Skymet, in November, Chennai received more than 400 mm of rainfall on average each day which resulted in the floods that we see today.[vii] According to Floodlist, Houston, an important American metropolis and the 4th largest city in the US was completely inundated after three days of rainfall measuring around 250 mm to 280mm per day during May 2015.[viii] Last month the Doha Airport in Qatar along with large parts of the city became flooded after a rainfall of around 80 mm.[ix] Also last month due to receiving rainfall of around 22 mm to 59 mm different cities in Saudi Arabia like Jeddah and Riyadh faced tremendous floods.[x]

Here I am reminded of an interview of a drought hit West Coast farmer in the US that I saw earlier this year in CNN. He said that the research centres are always bringing out crops which consume less and less water but there cannot be a crop which consumes no water.