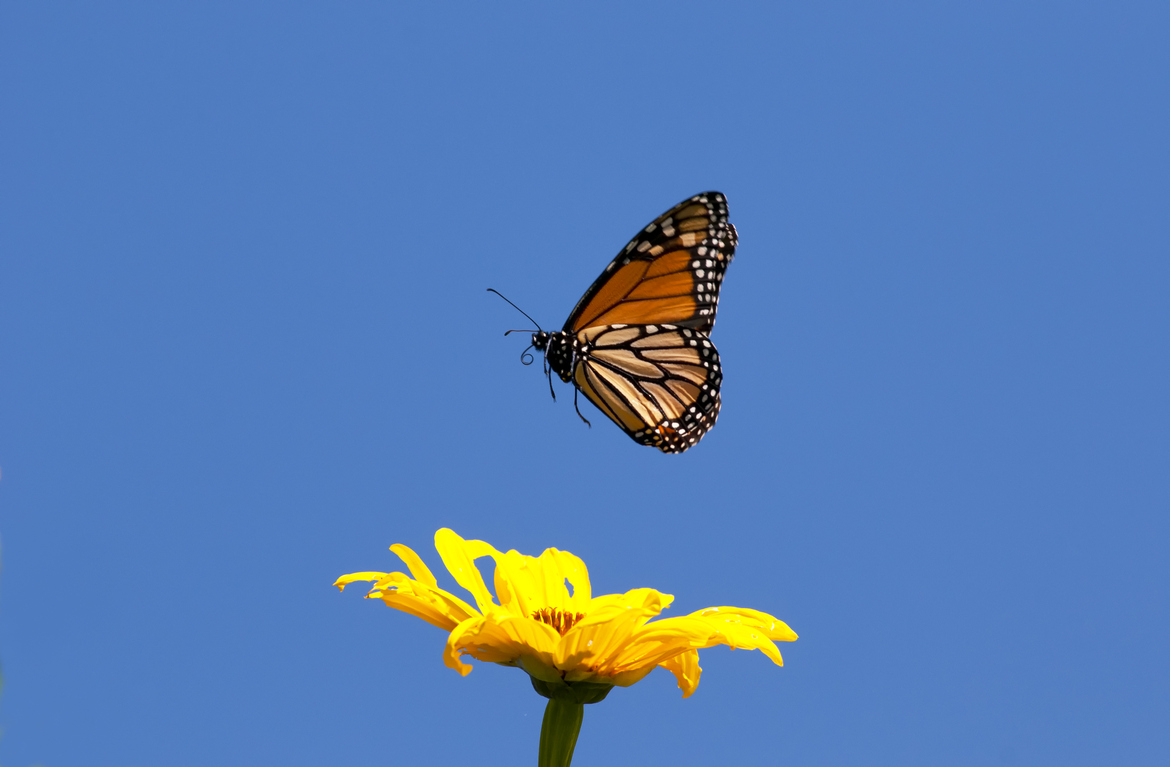 The only credible reason that I can find behind the meteoric rise of Donald Trump in US politics is that someone went back in time and stepped on a butterfly! For a country like US which loves its science fiction so much, I have no idea why no one came up with this conclusion earlier.

Recently, I have seen an avalanche of articles on Donald Trump in the world media in general and in the US media in particular. But there has been no mention of the butterfly effect or of the short story, “A Sound of Thunder” and how they relate to the Trump’s bid to become the president of the United States of America. So, I have decided to point out the relation before anyone else could (hopefully).

The butterfly effect is a constituent of chaos theory which basically talks about much bigger repercussions of small events. For example, the winds which are disturbed by the fluttering of wings of a butterfly in one location going on to create a cyclone in another. This theory is staple in American movies, books and TV series which deal with time travel. For example, in the Terminator movies, the “Machines” send killer robots back in time to “terminate” certain individuals so that the repercussions of their continued existence is not felt in the distant future. This theory was developed in the 1960s by Edward Norton Lorenz.

Now let us come to the interesting bit. I for one think that the chicken came before the egg in other words that at the very least the name of Lorenz’s theory was encouraged by Ray Bradbury’s short story – “A Sound of Thunder”[Spoilers on it right ahead]. In this short story- time travel is invented and teams of hunters go back millions of years in time to hunt dinosaurs which would meet its inevitable end at the same time when the hunters would kill them. Once these hunters reach the Jurassic age they are taken in only a specific path to hunt the dinosaur so that they have no effect on the surrounding environment. In one such expedition- the hunters sit around and joke about a fascist who wants to become the president. Then in one of these hunting expeditions, due to an unforeseen circumstance a hunter deviates from the normal path and steps on and kills a butterfly. When these hunters return back to their time- they realised that there are minor changes in their world everywhere and that the fascist presidential candidate who used to be the butt of their jokes was now the president.

My flight of fancy regarding the reasons for the growing popularity of Donald Trump has been so great because despite the clearly fascist tendencies of Donald Trump, he stands a 50-50 chance of becoming the next president of United States of America.[i] The response from the Democratic opponents of Trump to many of his proposed policies have been predictable – they compared them to those of Adolf Hitler’s. This is a significant role reversal from a few years ago when the incumbent president, Barack Obama was constantly compared to Hitler when he tried to increase the state’s role in providing medical insurance.

These comparisons to Hitler are going to be fruitless because we are still discussing the unimportant things about Nazism instead of discussing the politics and characteristic of Fascism and Nazism.

To start such a discussion it is important to first realise why comparing Trump with Hitler or the Nazis is an ineffectual means of criticism. There are mostly two reasons for this- firstly because this comparison has been made so frequently in the recent years that it has lost its shock component. Secondly, and more importantly such discussions are largely fruitless because the American people and for that matter many people around the world are still mentally prisoners of Hitler’s film maker- Leni Riefenstahl and the post war WW2 film makers who documented the atrocities of Nazi Death Camps. The images created by these two groups were so strong, striking and shocking that almost every time when we think of Hitler or Nazism or Fascism our mind see things through their lenses.

This was what the Lacanian philosopher Slavoj Zizek meant when he said that the biggest harm that the Nazis did to us was co-opting the Charlie Chaplin moustache! He did not mean that this was the biggest atrocity the Nazis did when they were in power but the biggest crime they committed after they were thrown out of power. This basically means that some of the imagery that we associate with the Nazis or Hitler has no relation with Nazism or Hitler per se. This is also the reason why Zizek strongly defends the German industrial hard rock band Rammstein who are sometimes accused of sympathising with Nazis because many of their concerts looks like a Nazi themed show. Rammstein have shown through their work that they are profoundly anti-Nazi, and it is through their imagery that they try to claim back the symbols which the Nazis had requisitioned from the German society and had them dragged through the mud.

We have to realise that it is this mud that has made it difficult for the American people to see the difference between the Nazi ideology and its images. I am not going to write an exegesis of Nazi literature here but let me point out some common misconceptions about fascist ideologies and try to remove some of the above mentioned “mud”.

The first and the most widely prevalent misconception is that the people live in fear of their governments and its agencies in fascist countries. Let me use a counterfactual to clear this misconception, if the people were so afraid of Hitler and his Nazi party then why did so many Germans vote for his party in the elections making him the chancellor of Germany in the first place? Here I have to acknowledge that there is no doubt that most of the people live in fear in fascist countries but it is not fear of the government but of the “others”.

The most prevalent concept and a basic foundational concept in Fascist ideology is that of the “other”. The “others” are the people or the communities which are reviled by the fascists and they attempt to spread this hatred amongst the common people primarily through suspicions, rumours and half-truths. Some of the common untruths that the fascists will try to sell with regards to the “other” communities will be that they are alien to the basic structure of the society that makes up the country, that their principles are different from those of in the majority and finally, that these principles will bring about the downfall of their country after which it will then be re-shaped based on the ideologies of the “others”. The Nazis assigned the “others” label to the Jews, Communists and Gays while Donald Trump has painted the Chinese, Mexicans and Muslims with the same brush.

The next concept that we should discuss is that of “oneness”. Countries with a Federal set up like Germany, USA and India are especially vulnerable to fascism because the democratic state due to its compulsions in funding primary education and keeping the country united often spread amongst its people a very simplified notion of nationalism or oneness.  But as the society changes and history progresses, economic mishaps take place, international conditions change and migrants come in. All these events lead to several groups or communities of people being left outside the “unity” story professed by the state. So, when the fascists come into the picture they have a lot of people on whom they could paste the label of being the “other”. But their strategy goes one step further and they remind people of a false utopia like situation before the “others” came to their country. This is quite easy to be achieved because the fascist just have to remind people of the simplistic nationalist concepts propagated by the state and to contrast them with their present day situation. But what they do not tell the people are these following simple truths – there was no nationalistic utopia in the past, the “others” are not responsible for their everyday problems- and the people’s problems cannot be solved by alienating or discriminating against the “others”.

Fourthly, and lastly the fascists spread the concept of the compulsion of “making sacrifices for the greater good” amongst the common folk. For example, this includes things like compromising on the basic values of the country to enhance its security, to discriminate against some communities for the safety and prosperity of others. ­The Nazis spread these ideas regarding their prosecution of the Jews and the US has been compromising its basic principles gradually since 9/11.[ii] But when I saw the prevalence of the famous poem by Pastor Martin Niemöller, making rounds especially in the American Republican friendly media outlets, I was assured that the US politics may be reactionary at times but will never take a fascist turn because they understand that discriminations, prejudices and prosecutions against one group of people could easily spread to others. But to my dismay Niemöller’s poem has been all but forgotten in the current political discourse. Let us remind ourselves of it once again-

I am an Indian and I do not very much like to comment on the internal politics of other countries. But many in India have taken encouragement from the US democracy to improve our own democratic institutions for example- many important aspects of the Indian constitution like our Fundamental Rights guaranteed by the constitution is based on the Bill of Rights of the US Constitution.

Under these circumstances it will be a sad day for democracy if the most militarily powerful country and the biggest economy in the world falls victim to its own insecurities and accepts fascist principles. This is a battle meant to be fought by the American people and as for someone who is not an American citizen, I can do very little – except hope that someone did not go back in time and step on a butterfly!

[i] This is assuming that the current circumstance where he is the leading Republican Presidential candidate remains and results in him getting nominated to run for president.

[ii]For example, giving approvals to torture prisoners in “Gitmo” and violating the privacy of its citizens through the Patriot Acts.